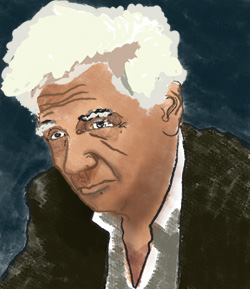 Teaching two classes this semester, a graduate class on Derrida (syllabus) and the usual undergraduate class on video game culture (syllabus), this time with 400 students, a new record. I had planned to make a bunch of changes to the undergrad class, eliminating Will Wright as one of my auteurs in favor of someone younger and newer (I thought about the Belgian indie design group Tale of Tales, and Jonathan Braid), but I realize that basically you get lots of points for inventing a genre, even if all your recent projects have been failures (for almost a decade now!).

So I’ll still do some Wright, but I’m going to add in more Braid, more Journey, more Tale of Tales, more indie games overall, just here and there throughout the semester.

As for the Derrida class, I have to say that I borrowed (with permission) the opening six weeks from Christopher Bush, who taught a similar class at Northwestern a decade ago.